Well… after talking to a guy named V., we finally decided to meet up in person today last Friday.

I’ve never met anyone from online before – aside from selling/buying used textbooks from students. I’m never nervous about textbooks meet ups because A) chances are, you’ll never see/talk to them again, and B) they need the textbook so there’s usually a low chance of getting stood up or anything going wrong.

I was nervous. Not as nervous as the last few minutes before you step onto a stage to perform, but just… a little nervous.

We agreed to meet up at Science World, originally at 3PM but he pushed it to 3:30. I was fine because I realized I wouldn’t make it on time either since I was still sitting in my final exam. When I got to Science World, I got a text message saying he’s going to be even more late… like 4PM late.

At that point, I didn’t get mad or anything but that means I would’ve waited 45 minutes for this guy. He told me the night before that he wouldn’t stand me up and I trusted him. But, now, since he’s constantly pushing back the time, it was making me second-guess this situation.

He arrived about 4:05PM. At that point, I was getting restless sitting at the same spot and killing my phone battery and chapters of my Stalingrad book. He eventually found me – I mean, it’s not hard to spot a little Asian girl with blue/green hair and a cat bag.

We went over to Urban Fare where we ate AND, get this,

His childhood best friend… is the brother of my best friend! I met my best friend’s brothers so I knew which one he was talking about. V. knew the entire family and it was all because we were talking about which elementary school we graduated from. And Sexsmith is not a common elementary name to forget instantly. I believe V. and Justin (the brother) are the same age.

The fact that he knew the entire family made me feel at ease. I know the family well enough that they only associate with good hearted people which made me feel better about V. not being a creep, haha. 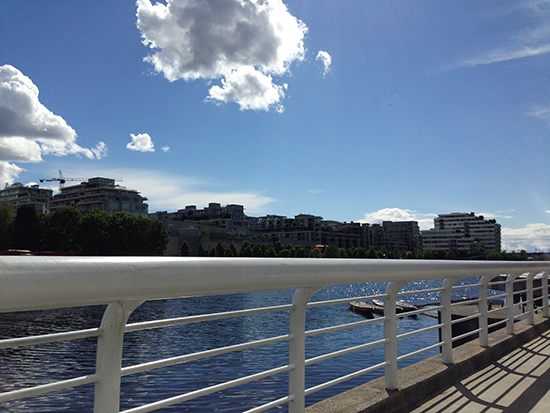 We went to a music store and walked around Gastown a bit before he had to go to his yoga class. Before we left, we agreed to make up a story about how we met. I wanted to keep it simple and say, we met at Science World, but he wants it a bit more elaborate. In the end, it still beats telling people that we met on Tinder, haha. That fact alone is just between me and my blog readers 😛

I got a text message about half an hour after we departed. He said “You look cuter in person than in your photos :)” and while that message should make me feel good, it made me remember The Boy again. And, I know I said I wouldn’t talk about him anymore, but a few days ago, he pretty much sent me a message that implied that he’s a fool for messing up everything and hopes to talk again (on better terms) in the future. And remember the bags of stuff I gave back? He’s holding onto them (ALL OF THEM) in hopes that I’ll want them back in the future.

Shit like that makes things so much harder. I want to see where my relations with V. can go, but I don’t want to make it too serious when my mind (and heart) is obviously still thinking about The Boy.

4 thoughts on “My First Tinder Meet-Up”

*This blog does not accept any affiliated links or sponsored posts.