If you haven’t heard yet, Dan and I went to the Powell Street Festival last Saturday. This is our second time visiting the festival, and our first time since returning from Japan.

We nearly forgot about this festival happening until we were both bored out of our mind Saturday morning and decided what’s something that’s fun and cheap to do for the day and the internet suggested this festival.

Our sole purpose was to eat some takoyaki and catch some performances. So, of course, by the time we arrived at the festival (only an hour or so after opening and it was JAMMED PACKED!), we beelined to the famous takoyaki stand. The line-up and wait for the food wasn’t too bad. 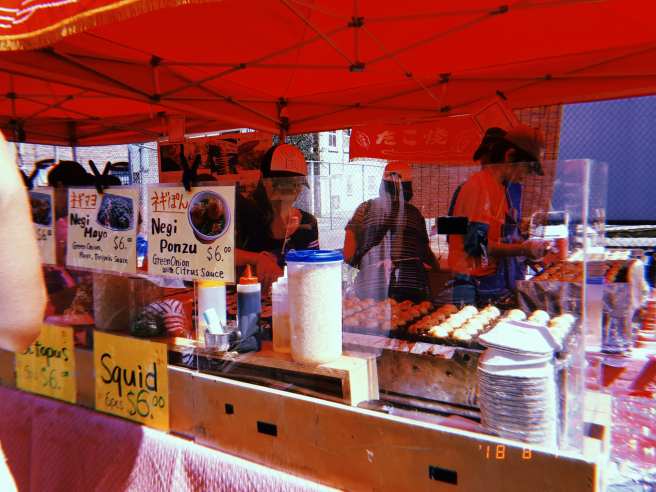 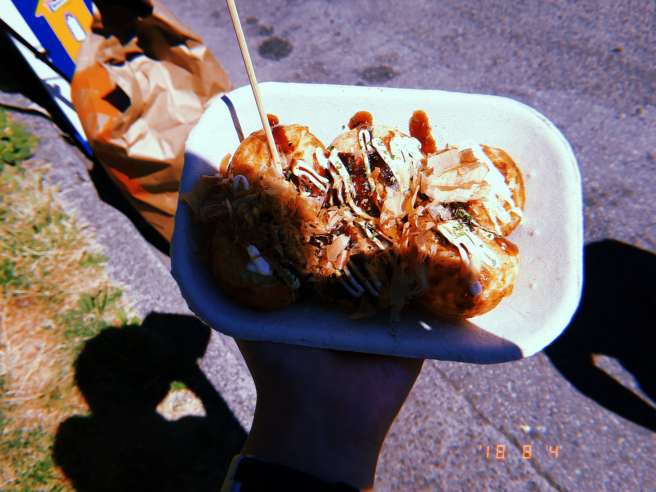 So, I personally think that Japan has ruined takoyakis for me… not because Vancouver doesn’t have authentic and yummy takoyaki, but because I think I overdid it when I was in Japan. I’ve never eaten so much takoyaki in my life than during that two weeks in Japan! I mentioned this to Dan as well after I couldn’t finish the remaining three balls and he agreed as well.

(At one point during the trip, we ordered a deluxe takoyaki for dinner and needless to say… it was a huge waste of money and I think that was the breaking point for us.)

After the food, we walked around a bit more to check out the booths and attractions. We skipped the merchandise area in an attempt to save our money because I had a feeling I’d be tempted to buy something. The booths were more or less the same as last year.

We walked across the field and found ourselves watching some performs set up Japanese drums on the stage. Dan and I decided to wait around to catch the performance.

So, I can’t recall the group that was performing the drums but it’s a famous Canadian drumming group made up of women. They were the first all-women drumming group in Canada, formed in 1990.

My favourite performer was this little old lady! She was so adorable, and really rocking the show. I mean… when I’m at her age, I only wish I would be half as fit as her.

After about 3-4 songs, we decided to call it and check out other things. Saturday was blazing hot and I was sweating like mad just sitting on the grass and watching a performance. Dan didn’t do too well – his shirt was just soaked in sweat from sitting.

We stopped by a gyoza place but didn’t feel like grabbing anything so we ended up driving back home and stopped by a Booster Juice. 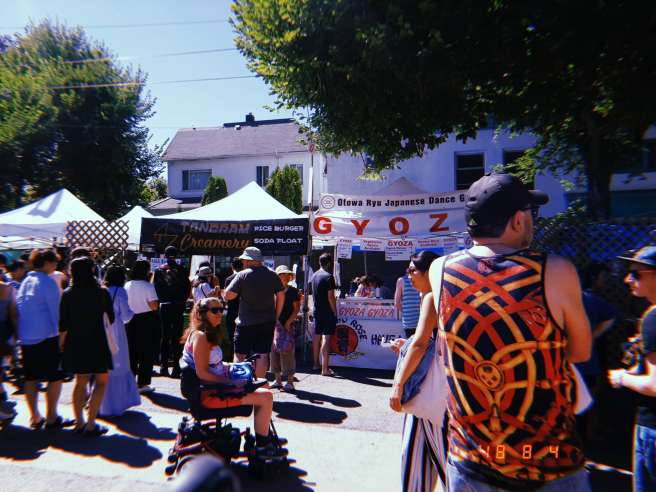 Later that evening, we went over to Stephen’s place to catch some UFC. It was a great Saturday, but waaaay too hot. If you haven’t visited the Powell Street Festival yet, I suggest doing it next year (as it’s over now). The food is good and cheap, and the performances and attractions make it fun. Best of all, it’s free!

Bonjour! I'm Claire, a 20-something years old Canadian blogger from Vancouver, BC. I love sushi, iced coffee, The Sims, reading, digital scrapbooking and travelling. View all posts by Claire @ Coffee with Claire